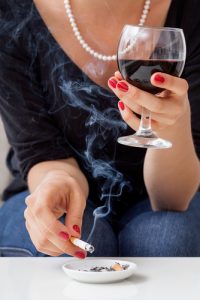 A little bit of alcohol has been shown in many studies to have health benefits. However, many people don’t know just how small “a little bit” actually is. According to the Dietary Guidelines for Americans, issued in 2010 by the USDA and Health and Human Services, moderate drinking means 1 drink per day for women or 2 for men. This is not, as some people believe, an average—if on only one day of the week, a man has three drinks, he is exceeding the moderate drinking range.

In the long run, if you’re looking to improve your health it’s much more sensible to improve diet and exercise than to try to get your health benefits from a daily drink. This is especially true when the benefits are weighed against the trouble that drinking can wreak on the body.

Probably the most commonly known effect of heavy drinking is the liver damage. Alcohol is poisonous to the liver, which means that repeated heavy drinking can cause scarring to the liver. With enough scarring, the cirrhosis can become fatal. The worst part about cirrhosis is that it strikes some people but not others. Right now, doctors don’t know what makes some people (especially women) more susceptible.

Chronic drinking can also cause anemia, which is when the body doesn’t have enough red blood cells. This results in fatigue and other problems.

This is not commonly known, but alcohol can increase the risk of cancer. This is because when alcohol is metabolized by the body, it turns into acetaldehyde, which is a carcinogen. Cancer caused by alcohol has been found along the digestive tract (mouth, throat, stomach), but also in the liver, breast and other areas of the body. The risk of cancer rises even further when alcohol is combined with tobacco use. 18% of Americans smoke (about 42 million people) which is a high number of people at increased risk for cancer without knowing it.

Alcohol can also increase the risk of heart disease. ….What? Isn’t alcohol known as a booster for heart health? Yes, but it’s all about the portion size. Once the drinker has crossed the line from moderate to heavy drinking, the good effects are nullified by the damage which can be caused. Heavy drinking can cause the platelets to clump up, leading to clots which can cause heart attacks or strokes. Excess alcohol also weakens the heart muscle and causes it to beat with abnormal rhythms. (Abnormal heart rhythms can also cause the heart to throw clots, which can cause strokes.)

Getting into less well known issues here, alcohol also can cause dementia by making parts of the brain atrophy. Some brain shrinkage is normal as people age, but heavy use of alcohol speeds the process and harms “executive function,” which means the type of thinking used for judgment, planning, problem solving, and the like.

There are more ill effects, too many to cover in detail here: depression, seizures, high blood pressure, nerve damage, pancreatitis (inflammation of the pancreas)…. Heavy drinking is much more dangerous than mild drinking is helpful!

How Alcohol Affects Your Overall Health

Alcohol: How Much is too Much During the Holidays

10 Signs You’re Drinking Too Much

5 Signs Alcohol Use Has Spun Out of Control